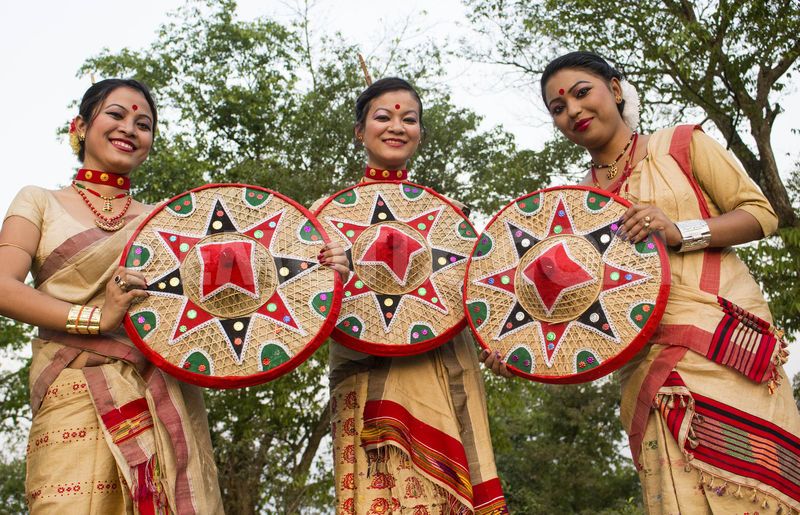 Assam Tribes: Assam is a place full of colors. There are a variety of cultures that you can witness in Assam. Every tribe has its own values and attributes. Also, they get to wear different kinds of attire as per their culture. Today we will be talking about their dresses in a bit more detail. Let’s start!

The traditional dresses in Assam and its different tribes…

The primary traditional dress of Assam for women is the Mekhela chador, which is mostly made from silk or Muga, for men, it is the gamosa and dhoti. The Mekhela Chador comes in vibrant colors and can be customized too. See also, How to celebrate Magh Bihu (Boghali Bihu) in Assam.

It is generally a two-piece that helps in folding it into like a sari. The Assamese women look very pretty in this traditional outfit. The men generally wear the dhoti which is made from pure cotton and is basically white in color. The Gamosa is made from cotton or in Assamese (kopaah).

This tribe resides in 11 districts of Assam. After Assamese, these are the second largest group of tribes in Assam. The traditional dress for the missing/miri- for women it is rihbi, gaseng, and seleng gasor which is wrapped around the lower part of the body, there is another piece in it named asgero which is used to wrap the waist part or around the chest part too.

Riya is also used to wrap around the chest part of the body. There are also some other parts in their dresses and they are segrek worn by married women and also a pohtub and an nkisek to carry a baby with.

This tribe is also one of the famous tribes found in Assam. Let us see what kind of traditional wear they wear. The women wear s a dokhona which covers the body from the chest to ankle. They wear a blouse too and cover themselves with a shawl named Jwmgra. The men used to wear gamcha to cover their body from waist to the knee and use the shawl Jwmgra too.

The outfit of this tribe is based on household designs. The outfit is really very colorful and gives a unique look to both men and women of this tribe. The women wear Rijamphain and Rigu. These two pieces are sued to cover the entire body. And the men wear Sgaopha which is more like a turbana Rigdo and a Risha.

The Deori women wear a Ujaduba lgoon which is worn around the breast. And they also wear a Riha also known as Tighira occasionally and then use a Gamosa to cover their head. On the other hand, the men wear ikhoon with a shirt or tee.

The Rabha live in the Indian states of Assam, Meghalaya, and West Bengal. They are a Tibeto-Burman group. Most of them live in the plains of Lower Assam and the Dooars, but some live in the Garo Hills.

The Karbis also wear very colorful traditional outfits. the main colors are Red, Black, Yellow, and Green. The woman wears a Pekok, Mini Kamphlak, Rumpan, and Piba for carrying a baby. The Men wear Choihongthor, Peseleng, Poho, and Chepan worn by the bachelors.

While there are many other tribes to look forward to and talk about their traditional attire. We give you these simple yet unique tribes and their traditional outfits worn every now and then. You can contact Loijaa Travels to visit Assam and the Northeast.

Coconut Oil benefits for everyone- Get to know what are those