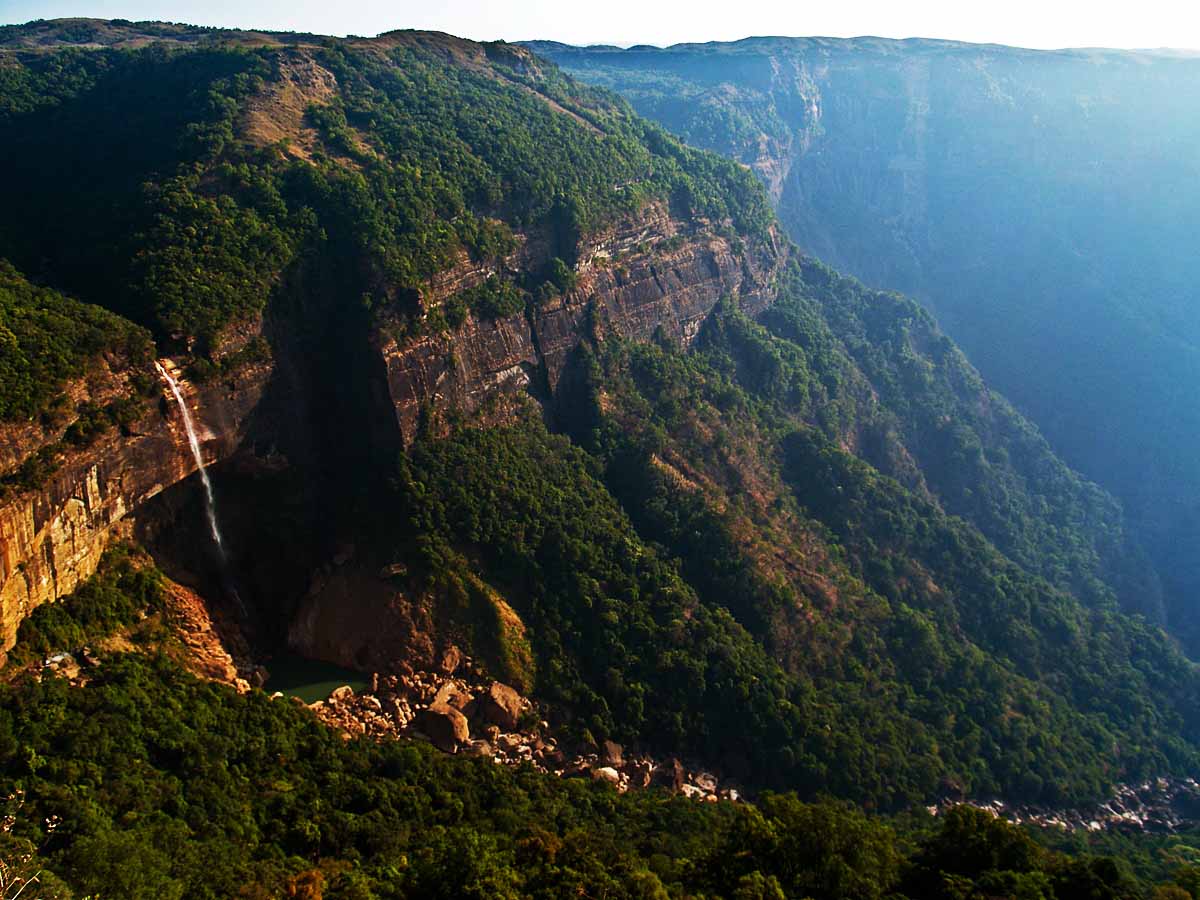 North-east India, the abode to the seven sisters is gifted with some mesmerizing and India’s tallest waterfalls gifted by Mother Nature. Meghalaya, in particular, is home to a plethora of enthralling, breathtaking, and tall waterfalls. Have a look.

Quoted at 340 meters, i.e.1115 feet, Nohkalikai Falls is the tallest plunge waterfall in India. It is situated near Cherrapunji, one of the wettest places on earth. Nohkalikai Falls are fed by the rainwater collected on the summit of the relatively small plateau and drop off in power during the dry season in December – February. Underneath the falls there has formed a plunge pool with bizarre green-colored water.

Langshiang Falls is located near the village of Sangriang, 24 kilometers from Nongstoin, on the lap of the west Khasi Hills. The falls can also be seen from Mawpon Village. The overall height of the falls is generally quoted at around 337 meters, i.e., 1,106 ft. Though it needs to be confirmed, if the statistics are correct, this is the third-highest waterfall in India.

This seven-part waterfall is 1 km south of Mawsmai Village in the East Khasi Hills district of Meghalaya. It is also called Mawsmai Falls or the Seven Sisters Waterfalls. The overall height of the waterfall is quoted at 315 meters, i.e., 1,033 feet, and has an average width of 70 meters, i.e., 230 feet, making it one of the tallest waterfalls in India.

In the rainy season, the falls thrust over the peaks of limestone cliffs of the Khasi Hills. The segments broaden most of the way along the cliff with a full sprint. The waterfalls get illuminated by the sun and the effervescent colors of the setting sun on the waterfalls make them look enthralling.

There are several waterfalls in the Sohra area near Cherrapunjee due to the heavy rainfall in the region. Namely Nohkalikai Falls and Dain Thlen Falls. The Jaintia Hills and the Garo Hills also have various waterfalls, mainly the Tyrchi Falls on the way to Jowai and Pelga Falls near Tura, Meghalaya.

It is the seventh-highest waterfall in India and is situated, 12 Km from Cherrapunji on the bank of the east Khasi Hills of Meghalaya. It is located inside Thangkharang Park. Kynrem Falls is a three-tiered waterfall, with water descending from a height of 305 meters, or 1,001 feet.

It is located in the Serchhip district of the Indian state of Mizoram, 5 kilometers south of Thenzawl. About 30 km from Serchhip and 137 km from Aizawl, the Vantawng Falls are also known as Vantawng Khawhthla in the Mizo language. It is a two-tiered waterfall and the 13th highest waterfall in India with a total height of 229 meters, i.e., 751 feet.

It is the most magnificent of all the waterfalls and cascades in the fast-flowing rivers of Mizoram. Though it is difficult to get close to it because of the steep forested hillsides adjoining it, the Tourism Department has constructed a comfortable viewing tower for tourists.

You can contact Loijaa Travels to Book your tour.