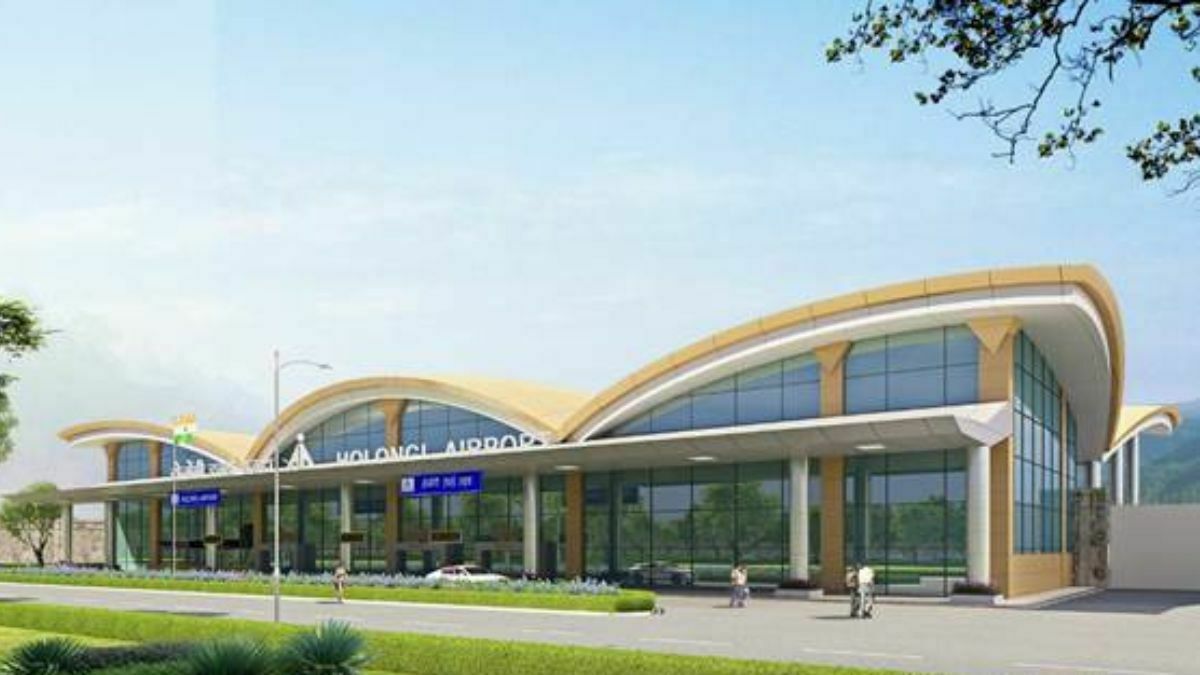 Itanagar Airport, also called Hollongi Airport and officially called Donyi Polo Airport, is a greenfield airport that is still being built. It will serve Itanagar, which is the capital city of the Indian state of Arunachal Pradesh. It is being built in the Papum Pare district at Hollongi, which is 14 kilometers south of the city center. The Airports Authority of India is building it on 320 hectares of land. The project includes building a 2,300-meter runway, a 5,100-square-meter terminal building that can handle 200 passengers during peak hours, an Air Traffic Control (ATC) tower, a technical block, and a fire station, as well as space for a hotel and a convention center. The apron will be 115 meters by 106 meters, which is big enough for two Airbus A321 planes to park. On February 9, 2019, Prime Minister Narendra Modi laid the first stone for the airport. Construction began on December 15, 2020, and was supposed to end in November 2022. However, the date was moved up to August 15, 2022, to celebrate 75 years since India became independent. Due to some technical problems, however, the airport will not open until October 2022.

The government of Arunachal Pradesh picked Banderdeva, which is 25 km from Itanagar, as a good place for the project in 2007. Shivraj Patil, who was the Home Minister at the time, set the project’s first stone on February 20, 2007. In 2011, though, the technical committee of the Airports Authority of India (AAI) turned down the site and suggested Holongi instead. AAI had suggested Hollongi because it was safer to run, less expensive to build, and easy to grow in the future. The Hollongi site was on flat ground, was easier to use in bad weather, and had room for easy building and growth. On the other hand, the Banderdeva site was surrounded by hills and could only be used by planes coming from one direction. Banderdeva was estimated to cost 980 crores to build, while Hollongi was estimated to cost 650 crores. Because AAI and the state government had different ideas, they got into a fight, which slowed down the project. In the end, the Prime Minister’s Office (PMO) ended the conflict in July 2012, and the Hollongi site was decided.

What are the features of the new airport?

In the first phase, the airport will have a single runway that is 2,300 meters long and runs east to west. This runway can be lengthened to 2,800 meters so that wide-body planes can land there. The airport’s apron will be 160 meters long and 115 meters wide. Two taxiways will connect it to the runway. It will be able to land at night and will have navigation tools like DVOR and Instrument Landing Systems to help it get around.

At a cost of Rs 646 crore, the Airports Authority of India (AAI) is building a greenfield airport in Hollongi, Itanagar, with help from the Center and the state government.

The Cabinet, which is led by Prime Minister Narendra Modi, approved the name of the new airport, which will now be called Donyi Polo Airport, Itanagar, according to an official statement.

How will the new airport benefit Arunachal Pradesh?

The new airport will provide much-needed infrastructure and connectivity to Arunachal Pradesh. It will act as a catalyst for economic development in the state and help improve the living standards of its people. The airport will also boost tourism in Arunachal Pradesh, which is a key driver of the state’s economy.

Bigg Boss Season 16: 5 Reasons You Don’t Want To Miss It

Stroke In The Beauty Salon: What Triggers The Stroke During Hair Washing? How To Prevent It