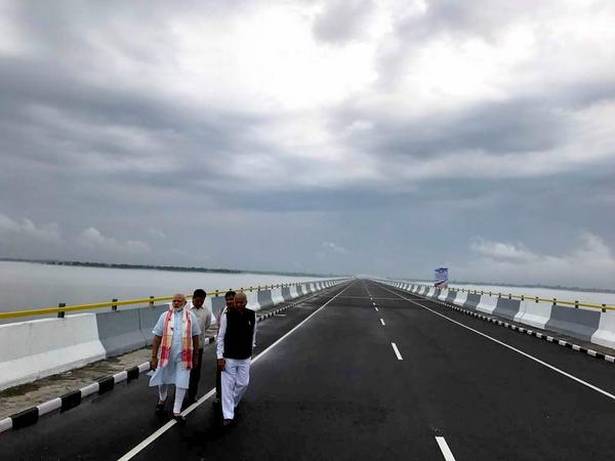 The nation’s longest river bridge, spanning 9.15 km, across the mighty Brahmaputra will be opened by Prime Minister Narendra Modi on Friday, bringing Assam and Arunachal Pradesh closer together.

The bridge, which connects Dhola and Sadiya in Assam’s Tinsukia district, close to the border with Arunachal Pradesh, would reduce travel time from more than six hours to only one hour. The renowned Assamese singer, Bhupen Hazarika, was born in Sadiya.

The Bandra-Worli Sea Link in Mumbai is 5.6 km longer than the Dhola-Sadiya bridge, which is almost twice as long. The bridge, the fourth spanning the Brahmaputra after Bogibeel (nearing completion), Kolia Bhomora, and Saraighat, is anticipated to improve connection throughout the eastern region of adjacent Arunachal Pradesh.

According to a government release, the bridge is also anticipated to revolutionize and enhance the northeastern region’s traffic connections.

A statement from the Ministry of Road Transport and Highways said that the bridge “would close a significant connection gap that has existed in the area.”

Each of the 182 piers of the DholaSadiya bridge has a seismic buffer because the northeast part of the bridge is in an area where earthquakes happen often.

According to a statement from the ministry, the only way to cross the Brahmaputra in the area up to this point was via boat, and even then it was not practicable during the floods.

The trip from Rupai on NH-37 in Assam to Meka/Roing on NH-52 in Arunachal Pradesh would be shortened by 165 km thanks to the bridge, it was said.

According to the Ministry, the new bridge is expected to provide prosperity to the northeastern region and would effectively link isolated, underdeveloped communities with the rest of the country via road.

In addition to helping a number of hydropower projects in the state, the statement said, “it would also meet the strategic needs of the nation in the border regions of Arunachal Pradesh.”

Quick tips on how to improve your concentration for work.